Lewis Howes: How A Tragic End To His Pro Football Career Led To Making Millions Online

Lewis Howes was a college football player in the USA, who had his career cut short due to a broken wrist injury sustained in a game.

Lewis left the world of football with no income, no knowledge of how to make money or any job prospects. His sister provided a couch for him to sleep on, which he leveraged well by using the spare time to learn about how people were making money on the internet.

Lewis became very active on LinkedIn and turned himself into one of the most well networked sporting personalities on the site. He leveraged his connections to start hosting LinkedIn meetup events in the real world, which gave him an income stream, albeit a very time consuming one. 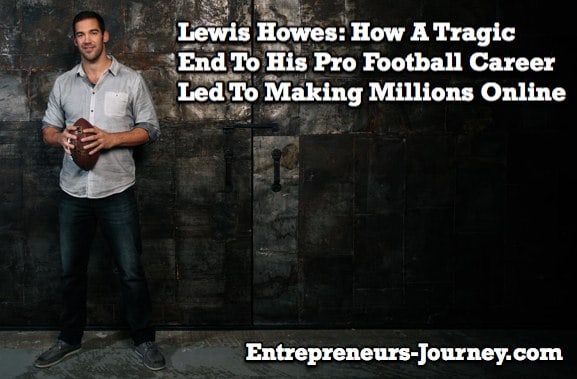 When Joel Comm invited Lewis to come talk about LinkedIn marketing on a webinar, the doors opened to a new income opportunity. Although a beginner to teaching online, Lewis loved the format and went on to become a full time LinkedIn marketing trainer, selling his teaching programs via webinars.

Lewis co-founded an online teaching company that made several million dollars over a period of three years. He conducted over 700 webinars during this time, and then decided he had enough of teaching LinkedIn and similar subjects.

He took a break, then just recently came back with a bang, starting a brand new business called the School of Greatness, which began with a podcast, and has now grown into a coaching program. As you will hear during this interview, the school is more like a movement that Lewis is proud to lead, than just a training course.

What dream could you achieve if you told the world you would get it done in 30 days?

Inspiration And The Practical All Wrapped Into One Interview

This interview begins with Lewis explaining what he is up to today and some of the key highlights behind the principles he runs his life on (including how he learned to play the guitar and salsa dancing using immersion). We then recap his career in the usual Entrepreneurs Journey Podcast style.

During the second half of the interview, things get very practical. Lewis explains exactly how he makes money and teaches other people to make money online, primarily using Webinars as the main marketing tool. He breaks down what tools he uses to build his email list, take payments, run his membership site and conduct his webinars.

Here are some of the other things we talked about…