My newsletter subscribers will be well aware that I recently moved to Melbourne. To meet new people I have been hitting local entrepreneur meetup events pretty hard.

Their first product, the Opena, a beer-bottle opening iPhone case was one of the early Kickstarter success stories, raising almost double their intended target of $15,000 (they raised over $28K).

Along the way they picked up endorsements from Ashton Kutcher and Jamie Oliver, among many other points of exposure in the media. This led to a successful launch for their first product. 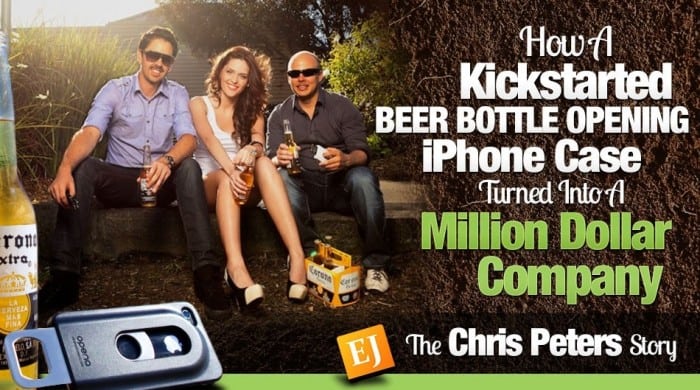 Their second product, the QuadLock case, which is an iPhone case that can be mounted on to things like a mountain bike, car or belt, was also initially funded to the tune of almost $40,000 on Kickstarter.

Since these two successful launch campaigns, Chris and Rob have continued to work hard to grow their company, now shipping their cases all around the world.

During this podcast interview Chris goes into quite a lot of detail about how their product was first created using Chinese prototyping services.

After the prototypes showed promise, they transitioned to Kickstarter campaigns to drum up attention and create enough cash flow to produce the first public offering of their products.

Listening to this interview will teach you a lot about what it takes to run a successful Kickstarter campaign and also what goes into the creation and delivery of a physical product.

I really enjoyed this interview because Chris was willing to answer all my questions in detail. Since I have not manufactured a physical product myself before, I had a lot of questions regarding how you come up with a design and how that design then gets made into something physical.

If you have ever thought about creating an innovative physical product, this interview will be inspirational and very practical.

Enjoy it – and thanks to Chris for being so willing to share his story.

Relevant Links Mentioned in this Interview

Where to Find Chris Online